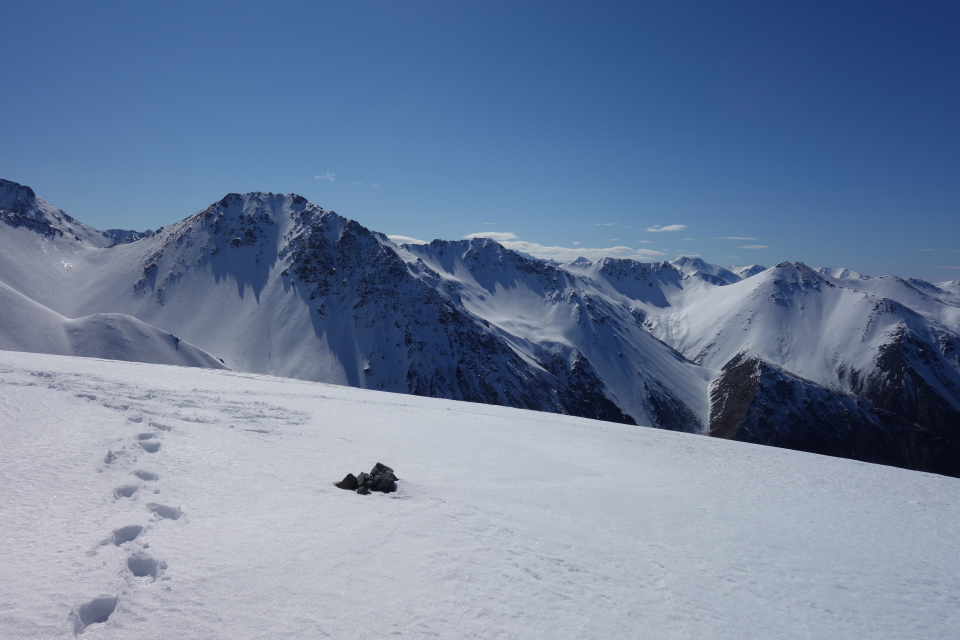 “A bit overweight, but that’s alright,” said the Air NZ staffer, as they attached a “heavy” label to my bag.

“Excellent,” I thought to myself. “I look forward to putting that on my back and carrying it around for a few days. Good thing there’s no water in there yet.”

All the regular winter tramping kit, plus alpine gear, plus avalanche equipment, plus climbing gear and snow stakes. Or, an introduction to the realities of winter mountaineering (for which this trip was a dress rehearsal).

The plan: take Friday off work; fly to Christchurch Thursday evening; drive to Lake Heron road end Friday morning and walk in to Cameron hut; do some snow walking and practise pitches on safe ground Saturday; walk out and fly home Sunday. Easy.

Thursday night was time to re-pack and check the forecasts. Things were looking promising for our three days, fine weather and reasonable avalanche forecasts for nearby areas (except the main divide, which was rated considerable).

So it was that on Friday morning I punched the road end into my phone’s map, fired up the navigation and… immediately questioned my decision. Tiffany and I had discussed our options the previous evening and decided that conditions at Cameron hut were safe enough to go ahead, but I was having a bad feeling. Set course instead for our backup option, Crooked Spur hut in the Two Thumb range, road end: Mesopotamia Station.

Three and a bit hours later we were out of the hire car and on foot, nearly crippled by the weight of our packs (I’m speaking for myself, and note with amusement as I write this that my phone’s predictive text suggested “pianos” in place of “packs” – have I mentioned that mine was quite heavy?) as we headed along the Te Araroa trail and up Bush Stream. It was thigh-deep and tough going, and the flow was strong. This is definitely one to do early in the morning before the snow really starts to melt and raise the water level. There is one gorge section which can be bypassed on a steep track on the true right of the stream which takes you up and over a hill; it’s not too bad and the gorge appeared to be fairly hard going.

Hard work, yes, but the scenery was truly spectacular. I have to say that from what I’ve seen, the Two Thumbs range is in my opinion the prettiest mountain landscape in NZ – genuinely world-class. Other points of interest included the fossils in the rock in the riverbed – pretty interesting.

It took us about five hours and 11 or so stream crossings to reach Crooked Spur hut. If you were staying here in poor weather, you might want a tarp or something as there were a lot of holes in the walls and ceiling. Having said that, if the weather was bad you’d never make it up Bush Stream anyway. Luckily we had nothing but clear skies all weekend. The hut featured lots of bench space, a table and proper chairs, plus reading material and cookware. There’s a fireplace, but the fire didn’t really have much of an effect on the temperature so we let it burn out. We were the only people in the hut all weekend.

On Saturday morning we left our overnight gear in the hut and headed up the ridge behind the hut in search of snow. The ridge was not too steep and only thinly covered in tussock before eventually being coated with snow. The snow we found was soft and a bit thin in places, but easily enough to practise building some snow anchors and “climbing” up and down the slope.

Clove and munter hitches, lead and top belays, top-clip, mid-clip and t-slot anchors and a variety of knots all thoroughly practised, we descended a gentle slope to a saddle to meet the TA Trail and follow the valley back to the hut. Here, we practised falling into leg-swallowing snow holes. A good day out, even though we didn’t get into the “proper” mountains we could see all around us. With a bit more energy (on my part) it would have been totally possible to get up onto the high ridgelines, though. This could almost be counted as another case of “unfinished business” for me.

The walk out on Sunday felt considerably easier than the walk in. It helped to know which side of the stream was passable, and starting earlier in the day made a difference to the water level too. We were out in less than four hours and only about five crossings (stick to the true right as much as you possibly can, I reckon you could cut down to three crossings, a scramble and a couple of traverses down the edge of the riverbed). We got back to the hire car at midday and set to having lunch and re-packing in the heat of the day. The temperature was 21°C, a bit different to the 9°C we’d had on the way in.

About three and a half hours later we were at the airport waiting for our flight. The less said about the return journey the better… Let’s just say that it turned into a bit of an epic but we eventually made it back to our beds in Wellington!

Overall a good fun long weekend, and another area added to my list of places to go back to at some point.

Hut to nearby peaks: Unknown, we didn’t make it that far! Estimate 3-4 hours

Other notes: there’s 4WD access a long way up the valley from Mesopotamia, and the first couple of km’s at least look drive-able by anyone with some common sense (check online for access info)

Bush steam would be challenging when it’s in high flow

This is all part of the TA Trail, remember that in peak season!