I am writing this letter as a warning to other young women in the club. It is based on my actual experiences of a recent trip I did, which overwhelmingly confirmed my initial suspicions that the WTMC has a serious problem with the type of men it attracts.

This latest trip was touted by the leader Jack as a medium grade southern crossing, and who promised we would all have a great time. A following email requested that more men sign up to even out the numbers – which of course seemed too good to be true to an available single woman such as myself. 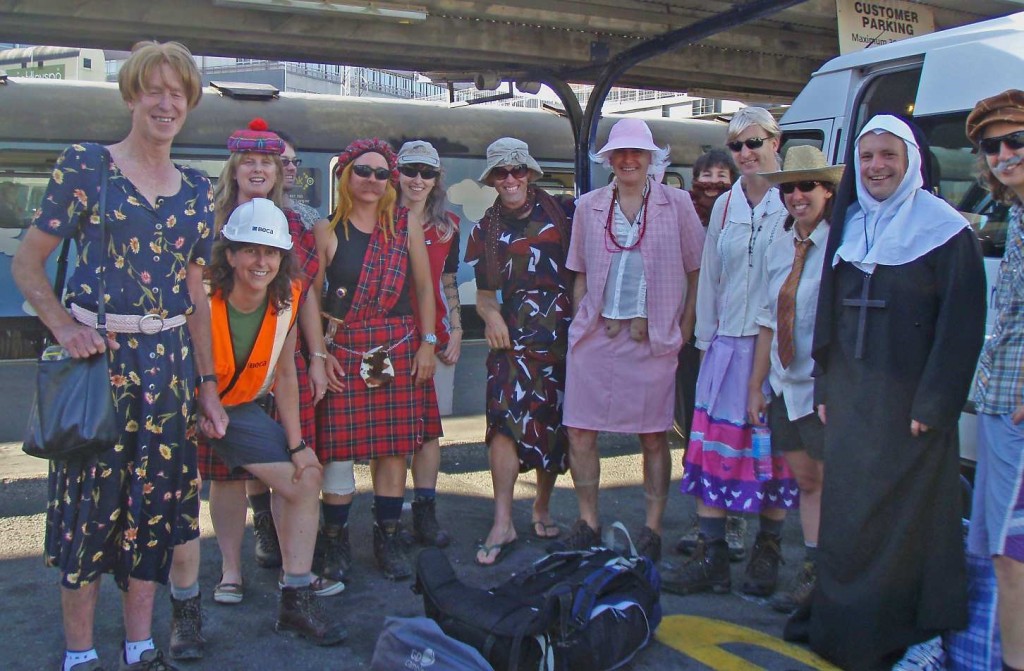 However, it became painfully obvious at Platform 9 on the Friday evening of the trip that the blokes coming along didn’t by any means match up to my hopes and expectations. While we women were all well turned out in neat and appropriate attire for a weekend tramp, the blokes were unshaven, with scruffy, ill-fitting clothes, and as it turned out, scruffy and grubby minds to match. Just take another look at the group photograph to see for yourself.

We eventually left Wellington late after the trip leader finally found a missing club van parked on some side street somewhere or other. The drive to Otaki Forks was pleasant enough with a stop for some takeaways (although obviously no thoughts by the blokes for a more intimate sit-down meal by candlelight).

The walk to Field Hut was pleasant on the warm evening — though spoilt somewhat by some blokes moaning how hot they were and how difficult the tramping was.

The following morning the girls were first up to light the cooker, fetch the water and put on the billy — no niceties by any of the blokes such as bringing us a cup of tea to have in bed. We may be tough trampers when we have to be, but we still enjoy being pampered – but the blokes just didn’t get it. Unfortunately this turned out to be too typical of the way the weekend was heading.

We wandered up towards Kime Hut just as the weather became a bit worse. Sister Mary had a higher-calling about here and headed urgently back down to attend to other-worldly matters. By the time we arrived at the but most of the blokes were cold and tired and were soon in their sleeping bags.

After some time when everyone had eaten and felt warmer the blokes were asked if they were ready to go on. None wanted to move! So much for the macho male trampers we hear stories about. True – it was just a bit breezy and a bit misty – but when I was young we were so poor I used to have to walk the 20 miles to kindergarten in bare feet along a gravel road wearing only a pair of my father’s cast-off underpants in weather worse than that outside the hut.

So there we stayed, and the afternoon passed playing games such as 20 questions where, without exception, the blokes took forever to get the answers to simple questions posed by the girls. Just another indication of the level of mental reasoning of the male brain. 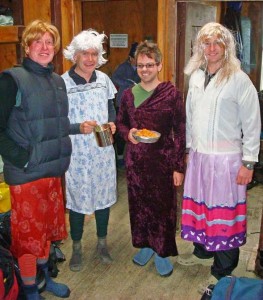 The blokes did actually cook the evening meal and it was certainly tasty enough- but there was no meat! How did they expect post-menstrual women on the trip to get by without the iron they needed at times like this? Again — just pathetically gormless, unthinking and uncaring. The dessert was appreciated by everyone — but it had been carried all the way to the hut by us women! And the blokes were certainly happy to eat more than their share.

An after-meal game continued the theme of grubby-minded males spoiling otherwise enlightening and uplifting entertainment. The idea was everyone wrote a sentence at the top of a sheet of paper. These were passed to the next person in the circle who drew a picture to match the words. Then the first line was folded under, the paper passed again and the next person wrote another sentence based only on the drawing — and so on. This should have provided valuable insights into the psyche of fellow trampers and encouraged warm, meaningful and lasting bonds of trust and friendship.

But of course this never happened. While the women wrote nice happy insightful sentences (such as ‘isn’t this fun’) and drew nice happy insightful pictures (such as the sun shining over the mountains), the blokes inevitably misinterpreted the words and drawings and resorted to gutter sentences such as, ‘there are bubbles coming out the long-drop’, and then drew pictures of toilets and poos.

Things nearly got completely out of hand when one bloke’s drawing showed a girl lying on a bed with her CENSORED and two blokes standing and looking, one with his CENSORED. This sort of puerile, perverted behavior to my mind is disgusting (but interesting) and shouldn’t be allowed on club trips.

On the way back down on Sunday in the warm sunshine when we women could dress more casually there was a constant reference by the blokes to breasts. Why was it so surprising to them that some were a bit bouncy, and others perky? After all, we all have them and they are all different. I found this particularly degrading and demeaning but they carried on with their ignorant innuendo nonetheless.

And it was not only me that was badly affected by this trip. On the Sunday morning Andrea was so traumatized by events that she had dressed with her brassier on the outside of her blouse without apparently being aware anything was wrong! 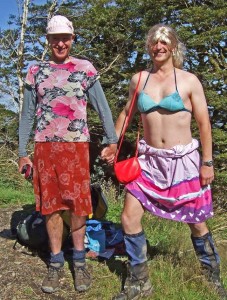 Additionally the effect on other folk we met was terrible. We passed families walking around the picnic area, and I constantly overheard parents having to reassure their young children, and calming them by telling them that everything was all right and that the men were probably from circuses or broken homes.

So there you have it ladies — a sad tale but true. The stories you hear of good-looking, fit, strong, and caring tramping blokes who will carry your gear, keep you warm at night in a cold but and then buy you a drink at the end of the weekend seem to be nothing more than a cruel hoax. Guys today seduce you with sweet talk of wonderful trips into the hills but then leave you with only empty disillusionment. Where, please tell me, are those male trampers of yesterday who really knew how to treat a female impersonator?

Mrs Antonia Unisex (I’ve heard of it but never had it)
Wellington Transvestite and Mincing Club.