This was a day trip as part of a lodge weekend over 6-8 March 2015. About 20 minutes from the Lodge, we crossed the railway line near the station in National Park village on to Fishers Road. The gravel road took us to a small car park at the start of the track. The local community are improving the track, so we helped carry a few buckets of gravel until the arms gave out to drop off points along the track. We started at 09:55hrs but the 20 minute easy walk to Tarankai Lookout was without dividends; just a nice view of low cloud. The section after the Lookout hasn’t yet had the gravel treatment so was a bit more rugged, but still a comfortable walk. At 11:30hrs we arrived at the Tupapakurua Falls lookout, with a good view of the top of the falls, but the bush prevents you seeing the valley bottom. 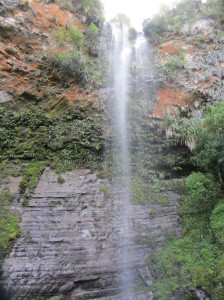 After lunch at the lookout, the walk back along the same route was uneventful, save Bruce meeting one of his employees from Wellington, just to prove you can’t get away from everyone! 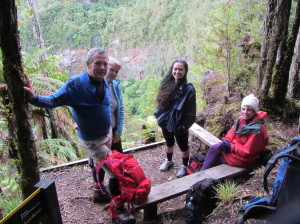 At 14:00 hrs we were back at the van having covered 9km on the walk. The weather gods were with us as we had remained fairly dry, and as we sat down for coffee and cakes in the National Park station cafe, the horizontal rain came in. A good day was had by all.