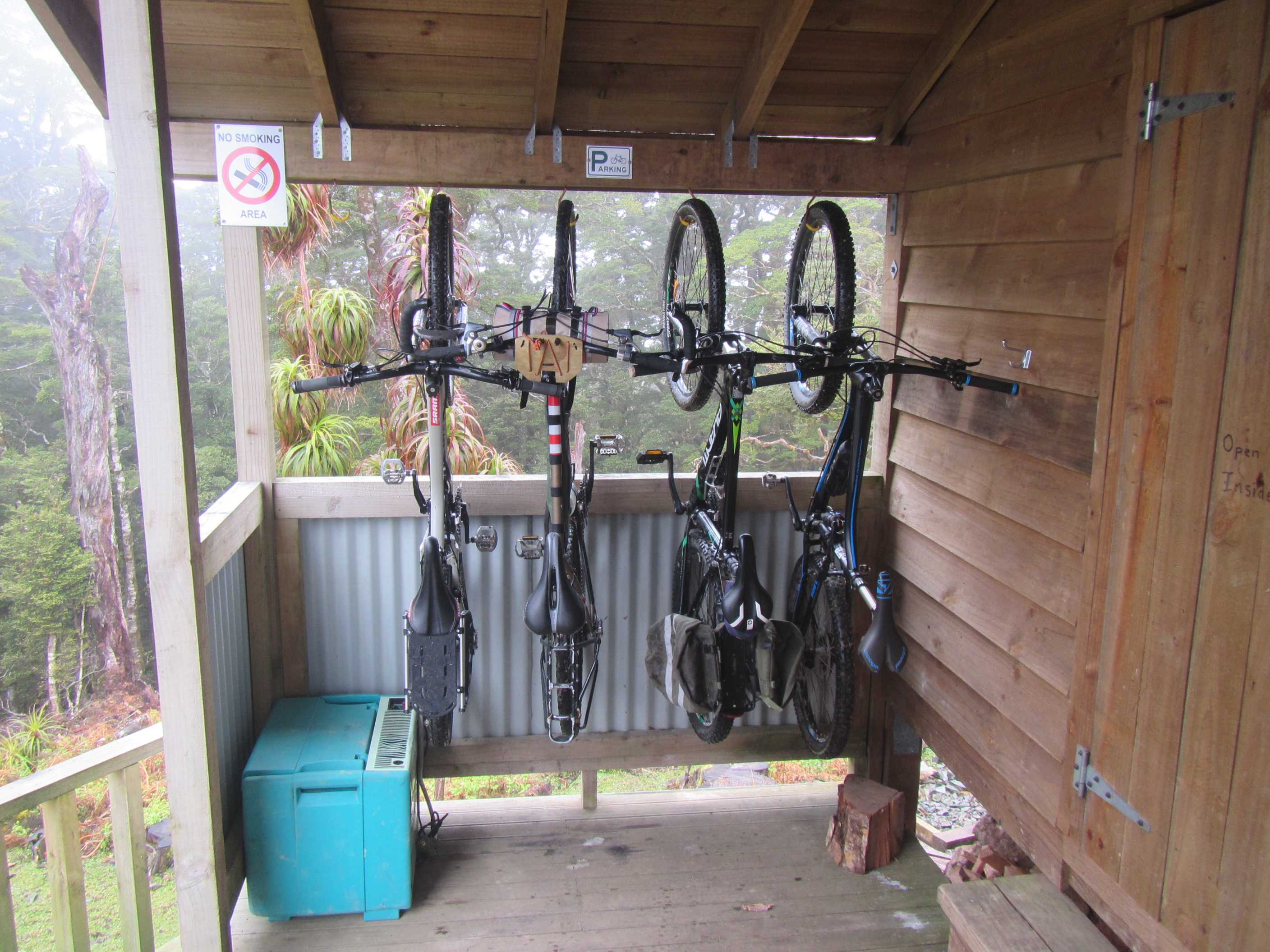 This adventure strangely and quite accidentally ended up being a joint venture, with two WTMC members and two Tararua Tramping Club members. I’m not sure if there is a history of rivalry between the clubs, but I would like to at least try to start some rivalry here by pointing out that the WTMC members were quite a lot better prepared … and perhaps better looking too.

The Old Ghost Road is a newly re-discovered gold-miners’ road, re-imagined as a mountain-bike “bike-packing” style trail and tramping track. It sits to the north of the South Island West Coast just outside of the Kahurangi National Park, and is accessed from the roads around Westport and Murchison.

There was a lot of anticipation and excitement around the creation of this trail, taking many years of paid and voluntary work organised by the Mokihinui-Lyell Backcountry Trust. The track was finally opened at the end of 2015.

The trail is generally split into two sections, including Grade 4 (advanced), or Grade 4 – 5 (Advanced & Extreme respectively). In my opinion, most of it felt like Grade 3 (doable) with some Grade 5 (not-at-all-doable), but Kristy and Sean I think cycled the whole lot.

The Labour weekend ferry from Wellington was busy as usual, but despite the extra traffic and the closure of the main road south through Kaikoura, the drive through to Murchison was very straightforward.

The Lazy Cow Backpackers includes a free muffin with every bunk – very delicious.

The first part of the day was about finding our stride, getting used to the weight of the bags across the bikes, getting used to each other’s pace and skill level (this was our first bike-packing trip together), and gaining some altitude.

The elevation chart below shows the route well, with the first day getting the majority of the climbing out of the way leaving the rest of the trip to be largely a downhill journey, with only occasional ‘blips’.

A lot of people aim for the further Ghost Lake Hut for the first night to complete the whole of the first climb, but our leader cleverly anticipated this and booked Lyell Saddle Hut, giving us a quieter night as well as a more gentle introduction to the trail after just 18km.

The climb was well-graded and gentle enough, and the weather was just right with occasional light rain to keep us cool as we peddled away.

A few other cyclists and trampers joined us for the evening, and no one seemed to mind sharing the trail with different ways of moving.

There are different grades of hut along the trail, with Lyall Saddle being a Category 1 hut. Category 1 gives excellent services : basically an insulated DOC-type hut, with gas, pots, pans, crockery, cutlery, washing-up stuff and even a bracing bucket-over-a-shower set-up for the brave!

Another fine WTMC Kedgeree recipe completed a cruisy first day (we found out the TTC and almost every other internet-savvy tramping club in NZ uses the WTMC cookbook … though they don’t like to admit it!).

It’s worth getting an early start for this middle day. Although it is only 47km to Mokihinui Forks Hut (or 50km to the Category 1 Specimen Point Hut), we found it was good not to feel rushed through some quite tricky bits, and to have time to be able to stop and drink in the views.

The beginning of the day for us included the rest of the main climb to Mt Montgomery at 1,332m and Rocky Tor at 1,456m, which sounds high but do remember the track is graded for biking upwards, and we were able to stay in the saddle most of the way.

There are some stunning views from this stretch of ridgeline but the weather wasn’t so interested in letting us see anything through the thick cloud. I didn’t mind too much, though, as I knew there were some dramatic drop-offs that I didn’t have to worry about seeing!

We generally went at our own pace up and down, stopping at the intermediary huts to catch up on exciting events and check in with each other. I led this first section as the least-good off-road biker (I’m Intermediate level 3 at best), then Nick followed swiftly on my heels while Sean and Kristy were able to take their time over breakfast as the most experienced riders.

Ghost Lake Hut was a lovely serene place to arrive for morning tea, with cloud drifting all about making it all seem very ethereal.

After Ghost Lake Hut came – for me – the hardest section of the entire trail, but also a pretty exciting one. The next 4km took us down some gnarly track and across a very ridgy ridge to the Skyline Steps. There was no way I was getting on my bicycle for this bit, so I ran it to keep up and had a ball, while the other three arrived at the steps with the biggest smiles on their faces so far.

After the steps was my first taste of the wonderful “doable” downhill stuff – a whole 9km of exciting windy track through forest, but a really well-graded surface without the crazy random rocks and roots of the previous bit. It was an absolute delight, with a fine lunch stop at the end at Stern Valley Hut.

Our last significant climb came next, taking us through a very spooky and rocky plain called The Boneyard. Despite being physically demanding, we all agreed this was our favourite climb of the trip for its unusual terrain and quirky views.

Once passed Solemn Saddle we were back to a magic cruisy downhill for 13km, popping into Goat Creek Hut (an old-school shelter and I think the only hut you don’t need to book), and on to Mokihinui Forks Hut, recently upgraded with insulation, gas and all the pots and crockery we desired.

[Specimen Point Hut – just 3km on from Mokihinui Forks – gave incredible views down the valley and might be the one to stay in next time, but it looks like it gets crowded].

The final 20km stretch of trail through the Mokihinui River valley was simply not long enough. There was a worrying first kilometre of very slippy and sticky mud (if that had continued it might have taken us all day!). But this soon turned into a thrilling ride on well-made but sometimes very narrow track, into thick native forest, along rocky riverside traverses and splashing through tributaries.

We were out before lunchtime, and found a very convenient puddle to wash our legs in until we spotted a way down to the river for a proper scrub!

And that was that for an incredible bike-packing adventure and what felt like a rare glimpse into the native bush adjacent to the West Coast.

I also think it would be a splendid lightweight Medium-Fit tramp over 3 full days … next time!