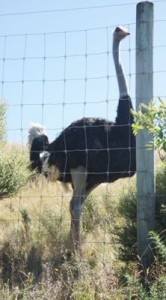 We met at the club hall in Moncrieff Street at 9am, and then travelled in two cars to the Wind Turbine car park above Brooklyn. After a short briefing about the walk, we set off.

The walk goes through the Te Kopahou reserve, following the metalled track past the radome on Hawkins Hill to the trig point on the next high point, then descends rapidly on grass and gravel tracks down to the World War II observation bunkers at the top of Sinclair Head.

It was a glorious sunny day, with a cool southerly breeze – perfect tramping weather. As we followed the track towards the radome (Air traffic radar dome) on Hawkins Hill, we had views over Wellington Harbour and back to the wind turbine, and also across to the wind turbine farm to the south-west and to South Island beyond. Also there was a surprise in store for us soon after the start of the walk – an ostrich! There’s an ostrich farm on the hill. 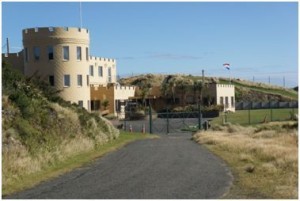 We took a short break just north of the radome, to take advantage of the shelter it offered from the southerly breeze. A couple of 4x4s passed us, taking tourists on a Visit Wellington experience. We were passed by several more during the day.There is a strange building like a castle on the hillside just below the radome, which I was told later was built for a film (though I don’t know which one). 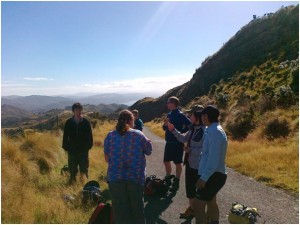 The descent from the Trig point is quite steep and we were soon at the junction of tracks where one track goes east. From here, we scrambled down the track to the bunkers. The bunkers were used as an observation post to watch for ships or submarines approaching Wellington harbour. Built from reinforced concrete, they have lasted well. We had a good look around, then found a sheltered spot for lunch looking out over the South Wellington bays. 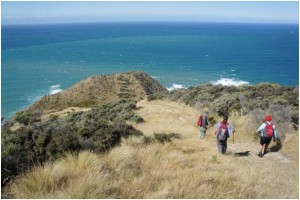 Then we started on the return ascent up to the Trig point. There is an alternative route back from the track junction, taking the track going East, descending further then climbing up to the Radome, but we returned the way we came. There is also a route which takes you down to the sea near Red Rocks – so lots of possibilities if anyone wants to explore the area another time. 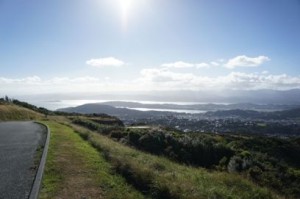 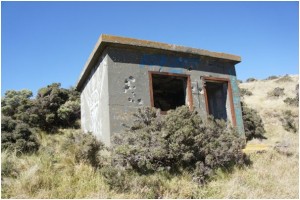