After Megan skilfully negotiated the windy road from Shannon to the top Mangahao Dam, we fly camped at the face of the dams. The recent rain had meant that the spillway was open and a little noisy. 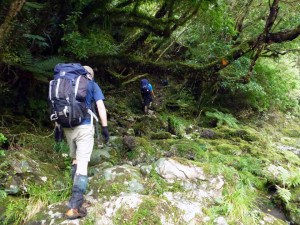 We left our fly camp at 8:00am and headed alongside of the dam lake up to the first swing bridge that crosses the Mangahao River. From here we meandered our way up to Mangahao Flats Hut. The track is very easy going. There are only two points to be vaguely aware of. The first is about an hour and a half into the walk there is a waterfall that is pretty much impassable but a short double back will indicate that the track goes up around the waterfall. The second is a semi-steep descent down an overgrown scree path – it is probably less hassle just to take the river route unless you need to keep your feet dry. 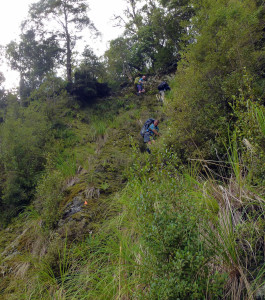 We made it to Mangahao Flats Hut after about 4:10hrs of reasonably easy walking.

After a short lunch we made for Te Matawai Hut via the Girdlestone Saddle. The saddle is at a relatively low altitude. There are a few rivers to cross but nothing major and Bob managed to make it across all the rivers with only getting one foot wet.

The track reaches a junction where it climbs gradually up to another junction and down to Te Matawai Hut. This part of the track is in superb condition and may have been very recently cut. Once at the junction Te Matawai Hut appears below in the distance surrounded by thick forest.

We made it from Mangahao Flats Hut to Te Matawai Hut in about 2:30 hrs. 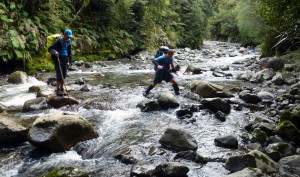 The rain had settled in to be quite heavy and cold at Te Matawai. The hut’s axe was broken and the wood was all wet so it made fire preparation difficult. The fire in the hut struggled to heat the room so after dinner everyone was in bed rather early to stay warm.

The rain had become quite heavy overnight and the northerly wind had picked up. We put on our rain gear and trudged our way out of the hut having decided with the weather the best option was to go over Richards Knob to Waiopehu Hut. The advertised time to Waiopehu is quite misleading in that it says five hours but we completed it in barely two and a half in poor conditions. We were all cold and wet at the hut (which is large and has no heat source) but quickly warmed up with hot drinks and food.

The track down to Poads Road from the hut was a simple walk which we completed in a little under three hours. There is good cellphone reception at Waiopehu and along the track so it was easy to organise a pick up at the road end from the Fit group who had been tramping in the same area.