I had run most of the Rimutaka Cycle trail before and I was keen to run the whole thing sometime as it would be a nice and long training run. However, I signed up to WeiMin’s trip to bike it as I thought it would give me a good challenge as I haven’t really done a lot of biking, especially mountain biking; and I thought it would be interesting to see if biking or running it was easier…

We met Kevin and Illona at the Upper Hutt Railway Station and then started biking from there. The first hill we had to climb up was pretty steep and I was quickly trying to figure out my gears, not quite managing this before we got to the top, which resulted in me having to jump off my bike on the really steep part. We reached Maymorn and finally got off the road and onto trails. WeiMin continued to give me some helpful advice about my gears and using my front gear. This was met with silence for a little while before in puzzlement I said “I have a front gear?!” After having more of a fiddle around with my gears with WeiMin’s help I eventually got the hang of them but I still managed to bike up a steep hill later in the day in the highest front gear before realising why it had been such hard work! The bike ride up to the Rimutaka Summit was enjoyed by everyone as it was a easy ride. The others had a great time zooming down the hill to Cross Creek while I nervously started going down very slowly with a death grip on my handlebars silently cursing my bike’s lack of suspension. Eventually when I was going slower than what I could have been doing at running pace, I decided to forgo the two wheels and rely on my two legs to get me to the bottom of the hill – the old fashioned term of ‘push bike’ suddenly took on a whole new meaning for me. Luckily for me, the rest of the crew were quite happy to patiently wait at the bottom of the hill in the sun for this Slow Coach. 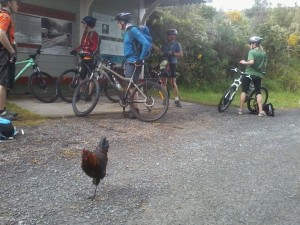 I was very glad to finally get onto the smooth road of Ocean Beach Road and this section of road biking was my favourite part of the whole trip and I enjoyed speeding along in front. It was at this point Craig caught up with us. He had being planning to do one of his ultra bike rides that weekend but decided to have an easier (relative to his usual distances!) bike ride and catch up with us – I did have a sneaking suspicion that he had perhaps come along to watch me make a fool of myself on my bike (and, yes, I did an excellent job in succeeding on that front). He did say that we were further ahead than he thought we would be – he thought we had stashed electric bikes somewhere – I wish!

Once we hit the coast, I was once again found myself at the back as Slow Coach as I struggled over the technical trail. I ended up doing a lot of pushing my bike as I just didn’t feel confident riding. Everyone had to push their bikes at some points as the sand and rocks made it impossible to bike – but the amount of bike pushing I was doing was really making me think I would have been better off running it; and indeed would have been much faster over that section if I had been running.

The Wainuiomata carpark at the end was a welcome sight for all as it had been a long day of cycling for everyone. Despite being a Slow Coach I really enjoyed it but I think I will be sticking to using two legs on trails rather than two wheels. I’ll be saving my wheels for the road instead.