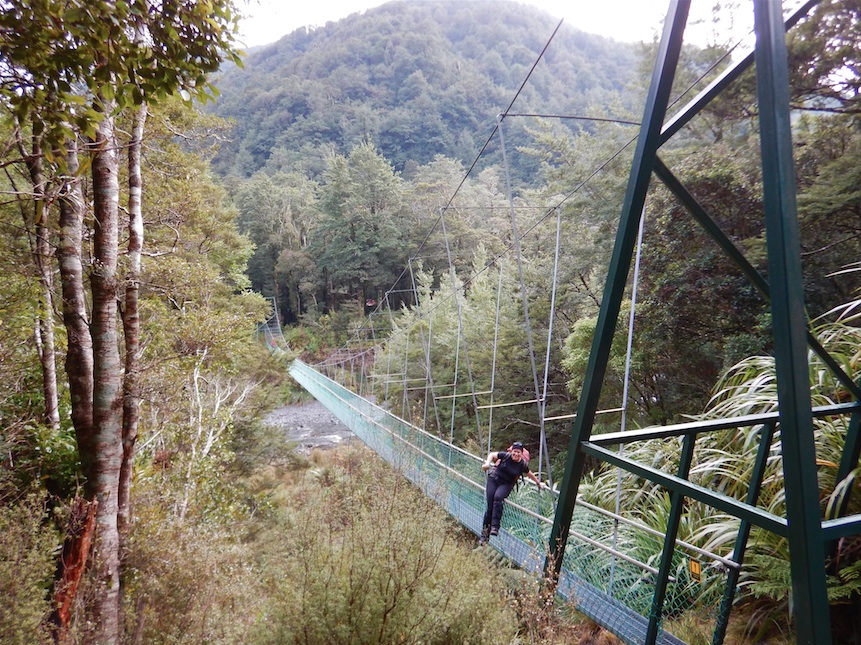 All photos taken by Tony S.

Tony’s Tarn Ridge trip appealed to me for two reasons. The first being the physical challenge. The trip had an “MF” label that would usually have sent me screaming in the other direction. However, over the past few weeks I had done a number of long day trips and (incorrectly, as it turned out) believed my fitness was up to it.

The second reason was a growing fascination with the depths of the Tararuas, thanks to some after dinner reading kindly provided at the Lodge – Chris Maclean’s Tararua: the Story of a Mountain Range. This book contains a wonderful array of stories about the history of human interaction with the Tararuas, both good and bad. In particular, Cecil, who haunts Powell Hut, became a topic of conversation on this trip!

I was anxious about how the trip would go and tried to do what I could to lighten my pack, without skimping on the warm clothes which were absolutely necessary at this time of year. However, when we pulled on packs at Kiriwhakapapa Road end at around 5.30pm on Friday night, it felt like my efforts were all in vain. The pack was heavier than ever! The sun had already set but it was a mild evening, and the plod up to Blue Range Hut was pleasant, conducted at an easy-medium pace. The only obstacles were some muddy puddles around the junction, and a snowball that came out of nowhere to hit my pack near Blue Range Hut! We reached the hut about 2 ½ hours after leaving the road end and were pleased to find it empty. There had been fears that a departing bus from the road end had dropped off a group of 20 scouts who would be occupying our accommodation for the night, but thankfully, we saw neither sight nor sound of these “scouts” the whole weekend.

We agreed on an 8am departure time on Saturday morning, half an hour after sunrise. At 8.07am we left the comfort of Blue Range and headed back up to the muddy junction. From here, every step was new to me. The track to Cow Creek siddles around a basin, the watershed for a tributary to the Ruamahanga River. The track was a bit ‘up and down’, but definitely more up than down. The group had to stop more than once for me to catch my breath, and the anxiety about whether I was up to the trip, which had departed after a nice night at Blue Range, returned.

After about 20-30 minutes from the junction, an easily missed metal sign marked a sidetrack to Te Mara Peak. We observed for a moment, and the others discussed possible day walk options to the Peak. From there, the track descended steeply, and we momentarily believed we were already on the descent to Cow Creek. Unfortunately this was not the case – there was still a decent section of flat stuff to go before we hit the turn-off to Cow Creek. From there the track descends some 400 meters down to the Waingawa River. The track then seemed to disappear into a slip, so we opted to get down on the riverbank and follow that for a bit, before rejoining the track just before the bridge over to Cow Creek Hut. We arrived at 11.30am, 3 ½ hours after leaving Blue Range. Given the sun would set at 5pm, I was already worried that we would not reach Tarn Ridge Hut in the five or so hours of daylight we had left.

My fears soon materialized. After a quick lunch inside the hut, we set off on the track to Arete Forks. The climb was immediate and steep, and there was no way I could keep up with the pace Marie, Emily and Tony were setting, which was the pace required to get to Tarn Ridge Hut. Tony very kindly stayed back and tried to keep me company, but it was obvious that we had to make a decision about what to do given I wouldn’t make it to Tarn Ridge Hut. I felt very guilty about hijacking the trip and suggested they carry on without me, but as is usual with my tramping companions they would hear none of it. Marie had the idea of stashing our packs at the junction on track which lead up to Table Ridge, and doing a day pack mission to just above the bushline from there. This proved an excellent idea. We carried on with just small day packs (except for Tony, who valiantly carried lots of heavy safety gear), up the next 400 meters or so. About 100 meters from the bushline we began to see patches of snow, which grew bigger and more complete the further we went up. When we popped our heads out of the bush at about 1200 meters the snow became more continuous, and only bits of tussock and leatherwood broke up the blanket of white. Knowing I planned on doing the club’s snowcraft course this year, Marie showed me how to step through the snow, which can be slippery and tiring to walk through. I cheated by just stepping in her sturdy footprints! We perched on the ridge about 100 meters above the bushline and studied the view around us. Although it was a cloudy day, we had a good view of the immediate surrounding ranges. It was a great feeling to see the ridges we had walked along, and the valleys we might soon explore. I had not managed to get very deep into the Tararuas before so it felt very remote compared to other trips I had done.

The cold wind drove us back into the bush pretty quickly. The descent was much easier and quicker than the climb had been, and we were soon re-shouldering heavy packs at the Arete Forks junction. From there I inched down the last 200 meters back to Cow Creek where we intended to stay for the night. Unfortunately in our absence two groups of three trampers had arrived and taken up residence in the hut, so we set up the flies on a nice mossy spot by the river. Marie went straight to work building an amazing fire that chugged away until well after we went to bed. It required a lot of feeding and tending in the cold, but she was very vigilant. After setting up the flies, we got on with dinner, which was a no-fuss packet rice risotto. We huddled around the fire for a bit after dinner, but the dark and cold made us slink off to our sleeping bags at 8pm. The flies had a perfect view of the fire, and I watched it for some time before dozing off.

The plan for the Sunday had been a day trip to Arete Forks Hut. Given my pace and the lack of daylight, we needed to be off as soon as it was light if this was going to work. When 6am rolled around however, the rain had started to fall and it was still pitch black. After some discussion between the occupants of the flies, we decided to abandon this plan and snuggle down into our sleeping bags for another two hours. When the more respectable hour of 8am rolled around, Tony valiantly tore himself from the comfort of the sleeping bag to boil some water, and in dribs and drabs we followed him out. With our campsite packed up by about 9.30am, we decided to head back to Blue Range Hut, with a side trip to the mysterious Te Mara Peak we had observed the day before. The plod back up the track to Blue Range was conducted at an easy pace, but even so we had to have a number of pauses for me to catch my breath. We made good time across the flat bit, but then had to conquer the “mega hill” – the 100 or so meters of ascent we had noted the day before. Somewhere along the way Tony suggested we depart from the track and practice our navigation to Te Mara Peak. We agreed this would be a good challenge for the afternoon. I made a start by scrambling off the track and up to a ridge, only to find myself back on the track after 5 minutes! From there Emily took the lead, and by aiming upwards, she led us onto a good foot track that eventually jointed the “proper track” to Te Mara Peak. Unfortunately the rain had began to fall, and pushing through the bush had made me rather wet, so after a few minutes admiring Te Mara Peak we scooted back down to the main track, and back to Blue Range Hut.

The Hut was empty, and we reclaimed our bunks from Friday night. While I quickly changed into dry clothes and got busy eating some cheese and crackers, Tony, Emily and Marie all rather courageously hunted about for some adequate firewood. Marie then started another excellent fire, which because of the wet wood, required frequent tending. Emily cooked us Moroccan couscous for dinner and Tony provided butterscotch/mallowpuff pudding. I bullied everyone into a game of cards (since I had lugged them all the way up the hill!) and we were in bed by 8.30pm.

The rain had really set in on Sunday, and it was a splashy descent down from Blue Range Hut to the carpark, conducted in a much more respectable 1 hour and 45 minutes. After some pack faff and dry clothes, we had a customary stop at the Wild Oats café where we readjusted to civilization with coffee and lunch.

Although rather disappointed that I didn’t make it to Tarn Ridge, and feeling a bit guilty about robbing the others in the group of their chance to do so, the trip was very pleasant. As with every trip, I learnt some good lessons about winter tramping, and picked up some tips from Marie on how to safely fumble about in the snow. She even lent me her ice axe, affectionately named “fluffy”, to make sure I look staunch and professional when snowcraft rolls around!