We met at Platform 9¾ bright and early on the 10th November and headed off, via a crucial pit stop at Maccie Ds, to the road end of the Whakanui Track.

Once there, we kitted up and headed up what felt like a near-vertical climb to meet the McKerrow Track.  We enjoyed a gentle tramp along the ridge of this track with a number of food stops and enjoyed taking in the beautiful forest scenery.

We tramped along in eager anti 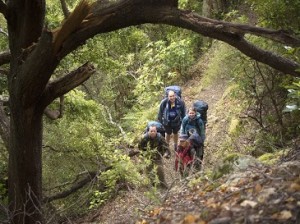 cipation of reaching the top of Mt McKerrow only to find that this was a little underwhelming in reality as someone had evidently stolen the sign marking the top, leaving just a small metal pole to mark the achievements of our up-hill tramp!

Not letting this dampen our spirits, we continued on downhill along the same track to meet the river, which was running really low. We walked along the river bed to Paua Hut where we met up with the other two tramping groups – the Family trip and the Easy Medium Tramp.

We were greeted at Paua Hut by Gustav from the family trip assuring us that the hut was safe as he had spent the past two hours scaring off the zombies. Relieved to hear this news, we pitched our tents and headed inside for a much needed cup of tea by the fire whilst the zombie eradication continued apace outside.

Dinner time was, as always, an exciting event, though this time even more so than usual due to the promise of the surprise dessert Mike had been carrying along with him. After a delicious tuna risotto, it was at last time for dessert. To our amazement, Mike casually whipped up a full-blown trifle, complete with chocolate shavings, inside a billy! It was delicious and, we assured Mike, worth every bit of the extra few kilograms of weight he had to carry to make it happen. Surely this has to go down in WTMC history as being one of the best-ever desserts on a tramp?!

To top off what was already fast becoming a pretty awesome evening, we joined the other WTMC-ers down at the campfire circle and enjoyed a firework display and toasted marshmallows over the fire. 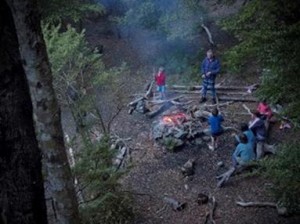 On Sunday morning, after breakfasting and packing up, Mike somehow managed to persuade us to head up Browns Track on to Cattle Ridge, rather than heading along a longer yet significantly less steep route to meet the track. With memories of the start of the track yesterday still fresh in my mind, I’m convinced that Mike should become either a politician or an advertising agent for this because, evidently, it wasn’t what he was selling but how he was selling it that did the trick.

Sure enough we soon found ourselves heading up another steep gradient, yet we did have numerous rests en route to lessen the blow. Once reaching the top though, we were all in agreement that this was in fact preferable to the alternative longer route.

Not long after joining the Cattle Ridge, we managed to take a bit of a bush-bashing detour, led astray by markers that looked deceptively similar to the DOC ones we had been following. Once re-discovering our correct route, we started debating how “easy” this easy tramp was and it seemed that the bush-bashing has achieved what the steep climb up Browns Track hadn’t – to unofficially upgrade the tramp to an easy medium.

With the excitement of the detour behind us, we carried on steadily downhill, stopping off for a lunch break before continuing along to the end of the track and finding the van. After a fun weekend, we all climbed into the van just on the right side of exhausted!

Just when we thought the weekend’s excitement was over, the club van passed the 100,000km mark on the way back to Wellington and we had a mini celebration to mark the land-mark moment.

Soon enough we were back at Wellington Station after what we were all in agreement was an awesome weekend. Huge thanks to Mike Gilbert for making it possible and, of course, for making the trifle against which all future club trips’ desserts will be judged!