Mike: It’s Saturday night, before 8pm. I’m hunched below a top bunk of Cow Creek Hut, feeling very well fed and trying to scribble these notes by torchlight.  Debbie and Eleonora are already trying to go to sleep. Debbie’s had the wood-burner going, and it’s toasty enough for me to have switched to a downstairs mattress, even though the mattresses don’t fit properly. We’re expecting rain overnight. A typical early winter’s evening after a fun-filled day. The original plan for this Medium-rated club Tararuas trip had been to climb Mitre and drop to Mid-King biv, but forecasts of strong gale-force winds swayed our intentions before leaving home. Instead, Debbie proposed a nav trip centred on Blue Range, which we hoped would be sheltered from the west.So it was that 24 hours ago, having arrived at the Kiriwhakapapa Shelter, Debbie, Eleonora and I strolled up the 600 vertical metres to Blue Range Hut with torches, arriving about two hours later. Blue Range Hut was empty, helpfully allowing plenty of space for the three of us.

Debbie had water boiling this morning before Eleonora or myself had bothered to sit up. It’s great when someone does that. After some uneventful breakfasting and packing, Eleonora and Debbie left me behind to sweep out the hut before I also left at about 8am. After just one obsessive compulsive moment, needing to sprint back and check I’d bolted the door, I caught them on the slope on the marked track which skirts around the side of Te Mara: the high point of Blue Range. 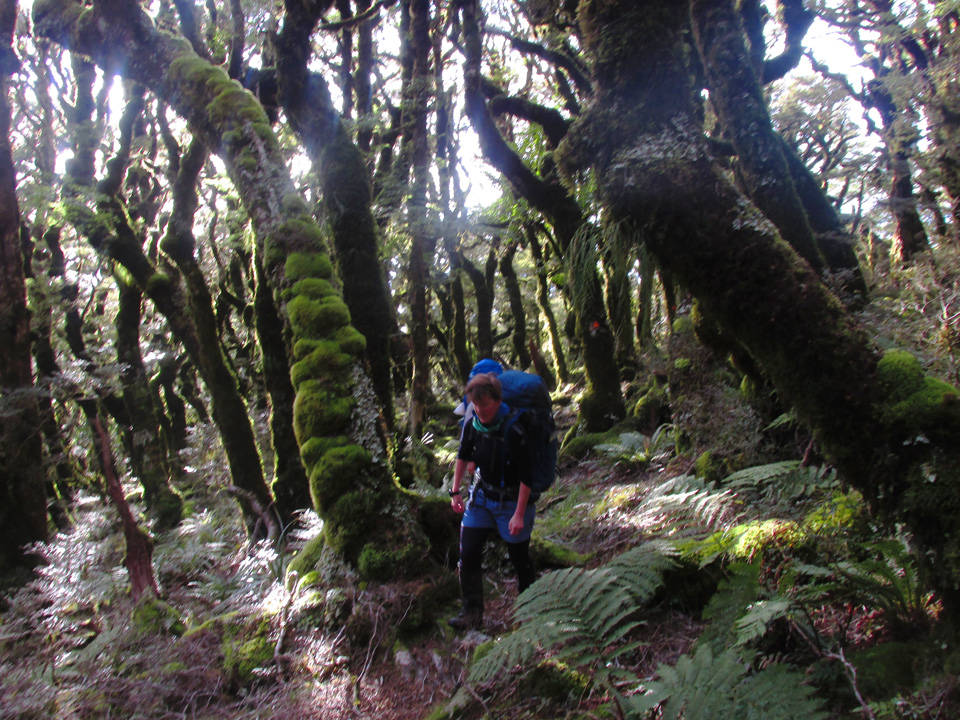 Despite the forecast for the highest parts of the Tararuas exposed to the west, we noticed barely any significant wind besides the occasional cold breeze in places where our downward-sloping ridge angled itself in certain ways. We even had sunshine, for a fairly pleasant walk. For me, it was a useful chance to practice some basic map and compass positioning skills along the track.

The initial and informally marked trail evaporates beyond .970, unless you’re aiming for Cow Saddle which we weren’t. Debbie and I each took a compass bearing, called out numbers, then argued about numbers because we use different systems. Eventually we waved our non-numerical arms around until they were aiming in roughly the same direction. It seemed to work. 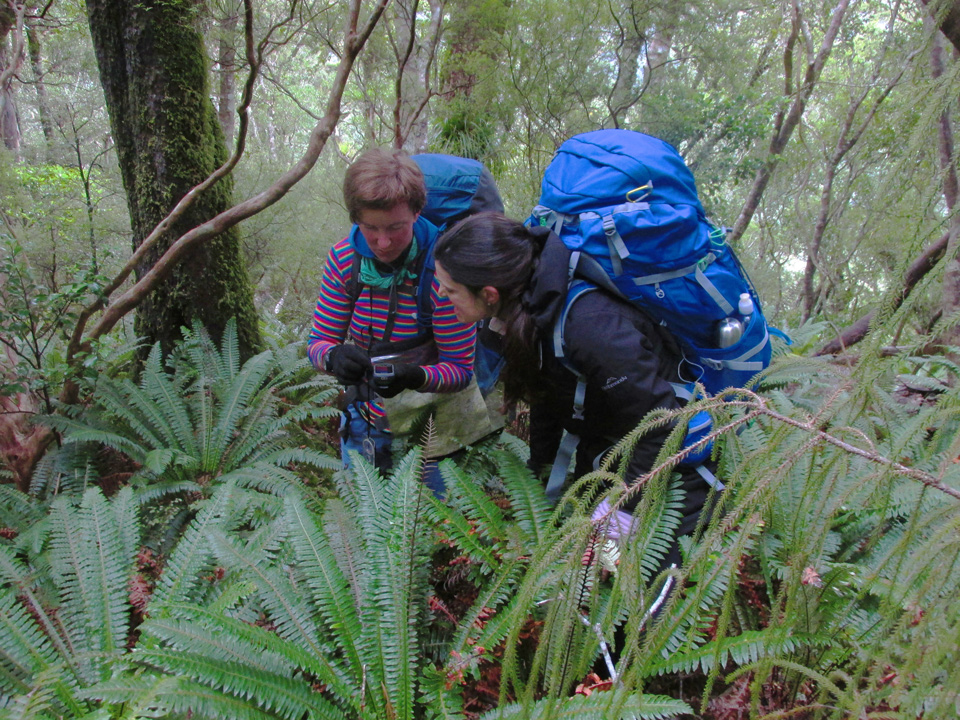 Eleonora was new to compass use, and I showed how to take a bearing from a map and translate it to a direction in the real world. Several minutes later after more confusion with communicating bearing numbers, Debbie re-educated Eleonora with the more aesthetically pleasing method whichs the red pointy end be aimed towards a giant letter ‘N’ instead of the real magnetic north. Then we waved arms in various directions again, and followed them, which also seemed to work because somehow we found ourselves at .790. It contained some dirt and at least two trees.

As an aside it’s pertinent to note that Lyle Brotherton, author of the Collins Ultimate Navigation Manual and lauded by his reviewers as the greatest global authority on navigation, states (p96-97) that when using a compass, one should adopt “the brace position” on one knee, as standard practice for the purpose of “signaling to others that you’re working and should be left to get on with it”.  None of us were navigating very well according to this.

500 metres north of .755 we stopped for a break, and also had to make a choice: Either aim slightly west of north and straight for the river, or continue to .655 and search for a way down from there. One might often use a coin to make a decision in these situations, but New Zealand’s cashless society had robbed us of our coins. Debbie had a credit card, however, and as it tumbled and twirled through the airborne fabric of our fates, I tried to remember which direction we had associated with each side.

Eventually, landing flax-side up, Debbie declared the decision had been made! 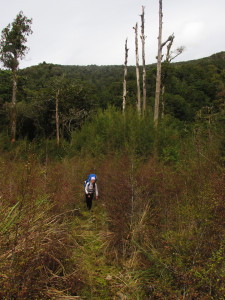 We’d aim straight down. After all, it was by now 11.20am. Lunch for all at the Ruamahanga River! Approaching the 500m contour, we became caught in a steep drop-off of a valley. I guess this is what happens when you don’t use the brace position to operate a compass. After some backtracking, sidling, then motoring forward and downwards, it was easily corrected and we walked into an orange triangle above the river. Lunch time!

From here, with the intended navigation done, our plan was to follow the marked track back to Cow Saddle, then down to Cow Creek Hut. It’s all orange triangles, but we still managed to become confused in a way that wouldn’t have been possible for anyone simply following triangles. Some simple observation revealed that the string of triangles we’d found didn’t resemble the track marked on any of our maps at all. Shortly after crossing Cleft Creek, they led us inland into an area which LINZ renders as an isolated dry riverbed rather than the very obvious waterway that it was, then took us most of its length, rejoining the Cow Saddle track about 200 metres north of the saddle itself.

The eventual trip down Cow Creek took us a little under an hour, via another string of markers which seem to have been redirected since I was last here. Finally reaching the Waingawa (still in low flow for now), I elected to stomp straight across, direct to Cow Creek Hut on the far side by around 4pm. 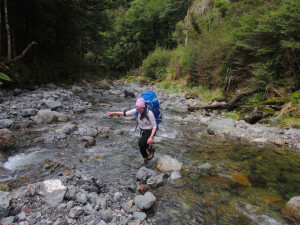 Debbie and Eleonora went to find the high-water route around to the enormous bridge, taking about another 15 minutes. It was good timing, too, as rain was beginning to fall.

Nobody was home, and once again we had the hut to ourselves. In fact, nobody had even written in the book since late June. Dinner’s worked really well for all of taste, food value, and not sticking to everything when I washed dishes afterwards. Anyway, it’s Saturday night, before 8pm, I’m sitting in Cow Creek Hut, feeling very well fed and trying to scribble these notes by torchlight. Debbie and Eleonora are already … actually, never mind.

Eleonora: We woke up at 6.45ish on Sunday – I had set my alarm at 7am but preferred being gradually woken by Debbie getting ready and preparing the billy for the first hot drink of the day. We had a good 10 hours of sleep, I reckon, and we were ready for the first adventure of the Sunday tramp: leg-stretching side trip to Table Ridge. The plan is having a quick wash at the stream, packing up all the stuff, do the trip, go back to the hut and hit the track back to the car park.

The Table Ridge  route is not on the map, but the track is well signposted. The weather is also forgiving. It’s been a steep 2 hour return walk up to the ridge and most of the track was within the bushline until the very end, where we walked our final steps to the ridge and got exposed to some shy sunshine hitting our faces. Although we didn’t carry our packs I still felt that my tongue was touching the ground! Back to the hut and after a quick break, at 11.30 we start the ascent back to the road end. 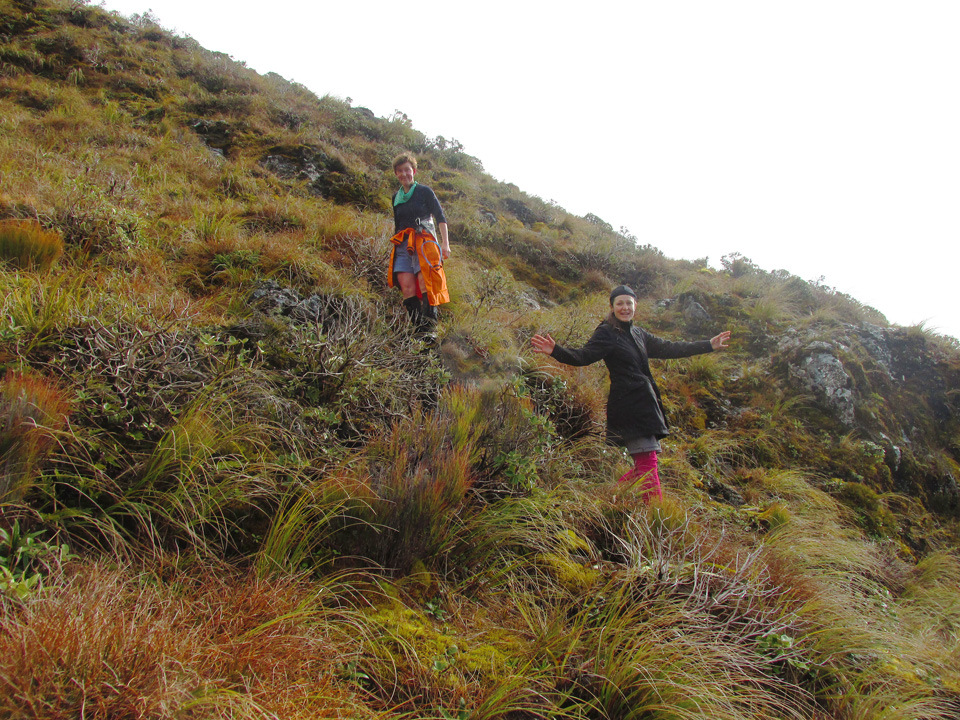 On our way back to the car park Mike had the honour to take a small detour to the Blue Range hut, where we stayed on Friday night, to check whether we (i.e Debbie) had left the window open or not. We all have our little obsessive-compulsive moments, don’t we? So Debbie and I are left behind by Mike – who must have been a steinbock in his previous life – and we would meet later at the junction.

Had lunch just after the junction and we have one more hour and a half to go. As expected, Mike was already at the photo-finish waiting for us.

This was a great experience to me, thank you Debbie and Mike for walking me safely all over the weekend!