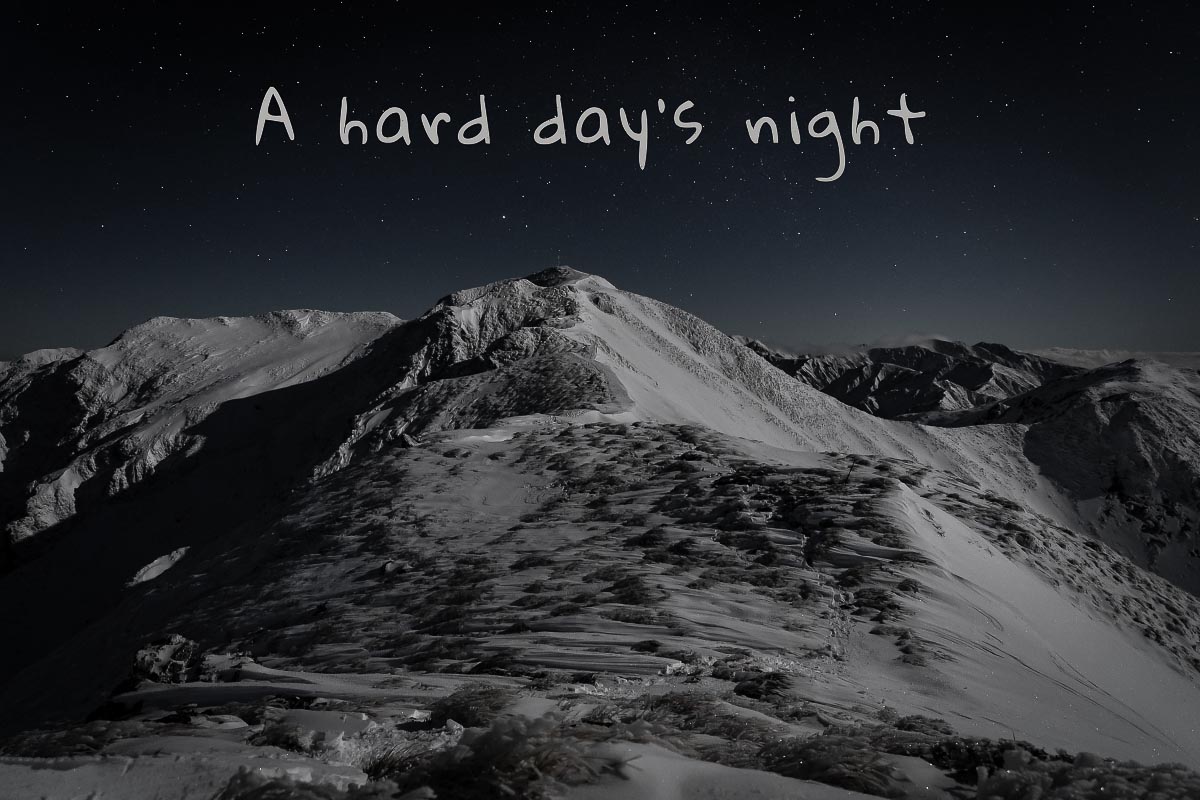 Walking from Powell Hut to Jumbo Hut in winter

[Aimee] Tony said it was time for another trip. We all agreed.

Outside of working hours, the best weather window was between Friday evening and Saturday mid-morning. Because of this, Tony suggested we go for a day walk, but at night. Recalling the last time we did a night-time day walk, I was a penduluming mix of nervousness and excitement!

Rasmus and I were keen, but the others (very sensibly) wanted to have a sleep somewhere along the way, so they took their full tramping packs. A cronut may also have had something to do with the team split. Team ‘RAT’ and Team ‘EMII’ were born.

[Emily] Some of the early emails about this trip mentioned ‘9 am finish’, ‘about 20 hrs’ and ‘Holdsworth to Mitre by night’ which is why I was firmly in the ‘sensible’ group as Aimee politely describes us. We (that’s Team EMII) had six snowshoes, seven walking poles, eight crampons, four ice axes and three PLBs between us. Full tramping packs is a bit exaggerated – this was an OSM + Tararua biscuit only kind of trip – there were no fresh veges for a WTMC Recipe book dinner. In fact there was no dinner. We each carried a sleeping bag and a set of hut clothes, and among the group we had a jetboil and a mountain shelter (available from the club gear room) in case of emergency, so it was the metalwork that weighed us down the most. Our plan was to wander our way over the tops from Powell to Pukeahurangi/Jumbo, stopping at Jumbo Hut to sleep sometime in the small hours. As a result of a serendipitous shopping splurge, my brand new red snowshoes had arrived just in time for a Friday night out and I was keen to give them a good time!

Team RAT started walking at 7:30 pm. Aimee did what she was born to do, which was plod along at the front very slowly, so as not to get too sweaty before the snowline. Once we hit the steps after Mountain House, the patches of snow became more frequent. The steps proved a bit tricky, having lumps of icy snow on them that made them a bit slippery, but eventually we got to Powell for a nice snack and warm-up inside the hut, where the woodburner was still glowing.

Team EMII were marginally ahead, starting at 7 pm and walking at an uncomfortable enough pace that at least some of us got unsensibly sweaty before we hit the bushline. At Powell Hut we swapped a bit of gear around and left I(an) to the cosiness of his sleeping bag and the promise of a sunrise photoshoot, arranging to meet back at the carpark at 11 am the next morning. Within 30 mins of leaving Powell hut we donned our snowshoes as we were falling through the relatively deep snow quite a lot. Despite me putting mine on the wrong feet they still helped us stay more on the snow than under it so we could maintain some forward progress towards Mt Holdsworth. (NB You can get away with learning to snowshoe on the fly in the right conditions, but if you want to learn how to use an ice axe and crampons I would recommend taking a proper course. WTMC Snowcraft isn’t running this year but there are plenty of professionally run options out there and WTMC members can apply for a scholarship to help with the costs).

Team RAT found that Team EMII had dropped an ‘I’ at Powell Hut. We pestered this I with our questions about their progress, then let him sleep. Putting on some extra layers, we set out to follow what was now Team EMI. The snow from Powell Hut onwards was better in that it wasn’t so hard and slippery, but instead it was soft and easy to fall through, so the going was slow. In addition, I had made the newbie mistake of not eating and hydrating enough and began to feel a bit ill. But onwards we wobbled.

And we were rewarded. The sky was perfectly clear. The moon was near to full. The ground beneath us was solidly white, reflecting the moon and starlight back up at us. Torchlights were not needed.  A welcome trail of footprints (and snow shoe tracks) indicated the way forward. On reaching Holdsworth, we had a snack in the silent night and took in the starscape.

As our shooting star count climbed to five, we reached the East Holdsworth turn-off. We could see flashes of torchlight below Mt Holdsworth as Team RAT followed our same route. Time for more snacks and a glug from the thermos to keep us going. There were no footprints along the next section to Jumbo so we had the delight (and hardwork) of making first tracks through the snow. Some sections we floated across wonderfully, others we crashed through the snow and sometimes into the scrub every few steps. It was tiring and our bodies were telling us it was way past bedtime, but we couldn’t complain with the moonlit snow-capped ranges and star-studded sky surrounding us. The snow was sparkling even without our headtorches on. It was almost 3 am when we stopped for another snack break having finished the climb to Pukeahurangi/Jumbo.

It was 1 am when Team RAT left Holdsworth. I was moving slowly and I was pretty sure I wouldn’t manage the next section of ups and downs to Jumbo. Team RAT took care of me, and we exited down East Holdsworth via a fantastic set of footprints left by fellow club members Marie, Sarah and Pete, who had been up there earlier in the day. As we descended, the air got warmer and the cookies I had shoved in (too late) on top of Holdsworth took effect. I felt better and started to rue my decision to exit early. I had secretly hoped to see a sunrise over white Tararua tops. But it is always good to leave an adventure to go back for.

The footprints reappeared for Team EMI’s last section down to Jumbo Hut, and I had to turn my headtorch back on just to try and focus my sleepy brain on each step. At 3:45 am we crept into the hut trying not to wake the five or so occupants. In the morning (actually just 3 hrs later – remember we had agreed to be back at the car by 11 am) we had more snacks for breakfast. Wearily, we made our way down Raingauge Spur and along the Atiwhakatu track back to the car hoping Team RAT hadn’t bought up all the cronuts from the bakery.

Team RAT dossed down next to our car at 7 am. Aimee was rudely awoken at 9.30 am by the engine of the neighbouring car roaring to life. Dazed and confused she watched him reverse, wind down his window and yell ‘that’s a pretty stupid place to sleep!’ In fairness, it was a stupid place to sleep. Within 30 seconds a new car pulled up, and a much friendlier driver hopped out and had a chat. We sleepily got ourselves together, packed up and headed for the bakery, where a cronut awaited Tony (who had never tried one before).

Our last memory of the journey was driving away and seeing the stark white peaks of the Tararua clouding over, exactly when Tony had predicted this would happen. Once again, I was stunned by the incomprehensible black art of predicting weather – a skill that, if you can master, will lead to many more magic nights in the Tararua Range.

2 thoughts on “Holdsworth to Jumbo tramp”