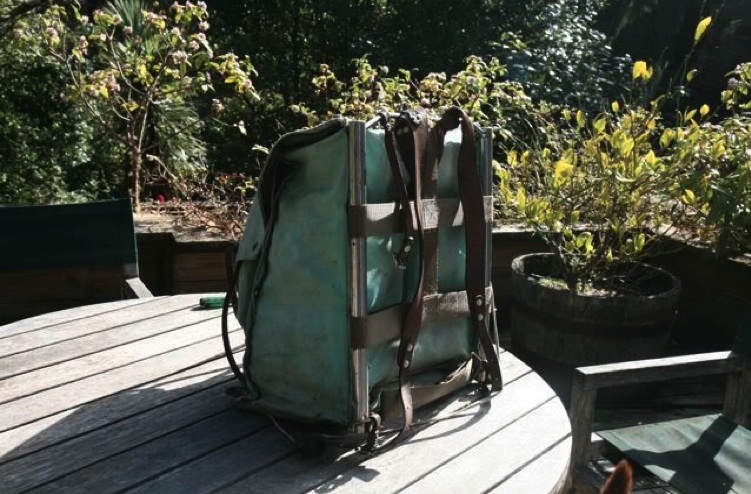 I had never been to Mid King Bivouac in the Tararua range so I signed up when Maj-Britt put this trip on the schedule. As a bonus the plan was to go to Dorset Ridge hut on the way. This is one of my favourite huts and it’s always worth a visit there.

After the usual Friday evening departure from Wellington we set off on the tramp from the Pines roadend. We arrived at Mitre Flats hut just before midnight. There were a few spare spaces on the mattresses for some of us while others slept on the floor or outside.

Normally when I go tramping with the club my pack (early 1990s Macpac Cascade) is the oldest pack. However, on this trip my sturdy Cascade was relegated to youthful status by Sam’s Mountain Mule. Mountain Mules are usually seen in museums or in photos of historic gear. These packs were made of canvas and had an external metal frame. Sam’s Mountain Mule looked in good nick and should last him a few more years.

We were on our way at 7.30 on the Saturday morning. We considered this a bit of a sleep-in as Maj-Britt initially wanted us to leave at 7 am. We started the climb up to Mitre Peak in pretty good weather although the wind grew stronger as we ascended.

One of the initial plans had been to go up to Mid King biv and then to Dorset Ridge on the Saturday and then back to Mitre Flats via Mitre peak on Sunday. The forecast looked better for the tops on Saturday so we decided to go to Mitre, then Dorset Ridge on Saturday. This plan left the Saturday night accommodation option ‘to be confirmed.’ Options such as Dorset Ridge hut, somewhere in Dorset Creek or Mid King biv were discussed. On a previous trip with Maj-Britt we had ended up camping on a ridge with no water. I started to wonder if would end up doing something similar again.

At the bushline on the track we put on our jackets and kept going. We had good views from Mitre Peak but the wind was strong and chilly so we didn’t stay too long on the top.

We descended the steep slope of Mitre before we traversed the tops to Girdlestone and Brockett. After stops here and there for drinks and snacks we got onto Dorset ridge and headed towards the hut. It always takes longer that I expect to travel along Dorset ridge to the hut and the hut is a long way down from the ridge itself.

We had a late lunch at Dorset Ridge hut and discussed plans. We could see the ridge and our route leading towards South King in the distance and we tried to spot any flattish looking spots on the ridge as possible campsites. We discussed staying where we were at the hut and leaving really early the next morning or of staying somewhere in Dorset Creek. It was about 3pm by this time so too early to stop for the day so pushing on and seeing where we ended up was the best option (the option of a waterless non-flat campsite on the South King ridge was looking more likely).

There is a bit of a trail and marker tape here and there leading down from Dorset ridge hut to Dorset Creek. We followed this steep trail down to the Creek. The last part of the trail is very steep and there is a real scramble at the bottom down steep banks to get to the Creek.

Dorset Creek is beautiful and we had an enjoyable walk upstream for 400-500 metres before we found the spur to South King. The sun was shining and we were doing ok. There were no flat spots for camping though.

At the foot of the spur to South King we realised we would be camping somewhere on the spur. We therefore filled up every container we had with water and started ascending. Again there is a trail and the odd piece of marker tape on the route. As we ascended we kept our eyes peeled for flattish spots. It was after 5pm by this time and we were getting tired.

After about 45 minutes of climbing we found the best looking place we had seen and started to prepare the area for our tent flies. Megan and Ian did a kind of Arnold Schwarzenegger impression and pushed a dead tree off the campsite. I did the less physically gruelling task of taking a photo of them while they did this while others in the group did the equally gruelling task of chopping up carrots and preparing the dinner.

We had enough water to have a proper dinner and we enjoyed a good meal and tasty dessert. We were lucky with the weather with no wind or rain and we spent a pleasurable evening on the spur. We did not have much of a view as we were in the bush but it was a good feeling to be camping up high.

There was some drizzle overnight and despite our best efforts to make a comfortable place to stay none of us slept particularly well. We were up early on Sunday in the dark as we had to get back to the Pines by 3ish to meet with Maarten’s group for the ride home.

There was heavy drizzle as we ascended and by the time we got to the tops the wind was quite strong. The drizzle meant we had no views from the tops as we travelled from South King to Mid King. It was chilly on the tops so we moved as quickly as we could. From Mid King there is a descent of 300-400 metres (quite a way) to the turnoff to the biv.

Mid King biv is in pretty good condition and was dry inside (although in a damp area). We took a few photos and had a snack and then continued on our way. Due to time pressure we had to keep moving and we followed a trail down to North Mitre Stream.

North Mitre Stream is rugged with some massive boulders so we had to bash through the bush to find the route to Mitre Flats hut.

We arrived at Mitre Flats hut about lunchtime. Maarten’s group had left a message to say they were leaving at 9.30 but that they were going to go for a coffee and then return to the Pines to collect us. We were concerned about the time as Maarten had to get home and then go to work that night. Ian, therefore, sped off in order to get to Maarten as soon as possible to tell him that we were on our way (and not to leave without us).

We had a quick trip out along the Barra Track and found Maarten and his group waiting patiently for us in the van.

In the end it had been a typical Tararua tramping trip : Friday night to the hut, early starts, good weather, poor weather, tops travel, river travel, dodgy campsite and a hurried last day to get out. We covered some great terrain, had views, a beautiful stream to travel up plus we bagged a biv. Thanks to Maj-Britt for organising another adventure in the Tararua Ranges.