This day trip showed me just how accessible the bush is from Wellington city.

Our very organized trip leader (Clinton) gave us all the details we needed to get to the start of the Whakanui track using only public transport. In short you can take the 8.35am train on a Saturday morning from Wellington Railway Station to Waterloo and then get the 9.05am #170 Bus from Waterloo Station to Hine Road at Sunny Grove, ready to get on the track at 9.30am. As it was, we were only a group of nine so we fitted into two cars (thank you Clinton and Michelle!)

The entry to the Whakanui track can be found through the crematorium and behind the grassy hill (luckily Clinton knew where he was going). The track starts with some small ups and downs through long grass for 10 minutes before getting into the bush proper. F 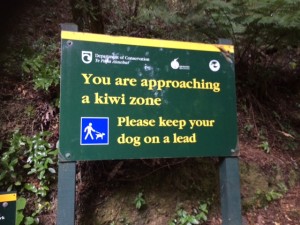 rom there the track climbs steadily, and some might say relentlessly, for about an hour. This is the steepest part of the track, giving you approximately 500 meters in altitude. It is at this point we stopped to admire the fork in the road (and catch our breath). The first path continued as the Whakanui track while the second, which we took, became the McKerrow track. From there the climb was less steep, but more rooty and muddy than previously. We were essentially following the ridgeline, getting occasional glimpses of Wellington through the craggy and bare tree branches. 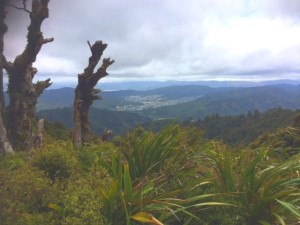 The day was cloudy and windy, so it was not particularly pleasant to stand in these exposed places for long. After about an hour and a half of this, I noticed we passed a small pole, approximately 30 centimetres in height, planted in the middle of the track. I thought this was odd. However it was only when Clinton called out to us from the back, and the gradient of the track had changed to a downhill slope, that we realized we had summited the mighty McKerrow (standing at 706 meters tall). This was somewhat of an anti-climax after what was a bit of a slog up hill. However, we duly posed for a photo with the iron pole to prove what excellent mountaineers we were. We carried on downhill for perhaps another 5 minutes where a fork in the track left us plenty of room to sit down and have lunch. 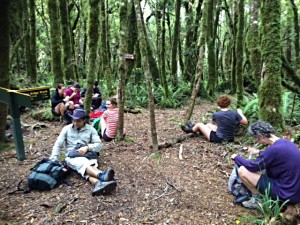 The return journey back down the hill seemed much quicker and easier than I had anticipated. I took up what is now my customary position at the back of the group and pondered how only a year ago (in fact, just one week shy of a year ago) I had fallen over and broke my ankle at Makara.  Although still occasionally sore, I revelled in the achievement of accomplishing an equally challenging day walk in the same traitorous gym shoes.

I was rudely awoken from this pleasant reverie when a naughty wasp climbed inside my pants and stung me on the thigh. While I tried to put on a brave face and laugh it off, it was actually surprisingly sore. Luckily we were only ten minutes from the end of the track. But I became incredibly dark that I had been struck down so near the finish line by this simple childish milady.

Although Clinton suggested a coffee as a reward, some of us were keen to get home and have a shower, and one of us was even keener to inspect her wasp sting.

Overall the climb took us approximately 6 hours, including a half hour stop for lunch. Apart from the wasp, a very pleasant way to spend a cloudy Saturday in Wellington.