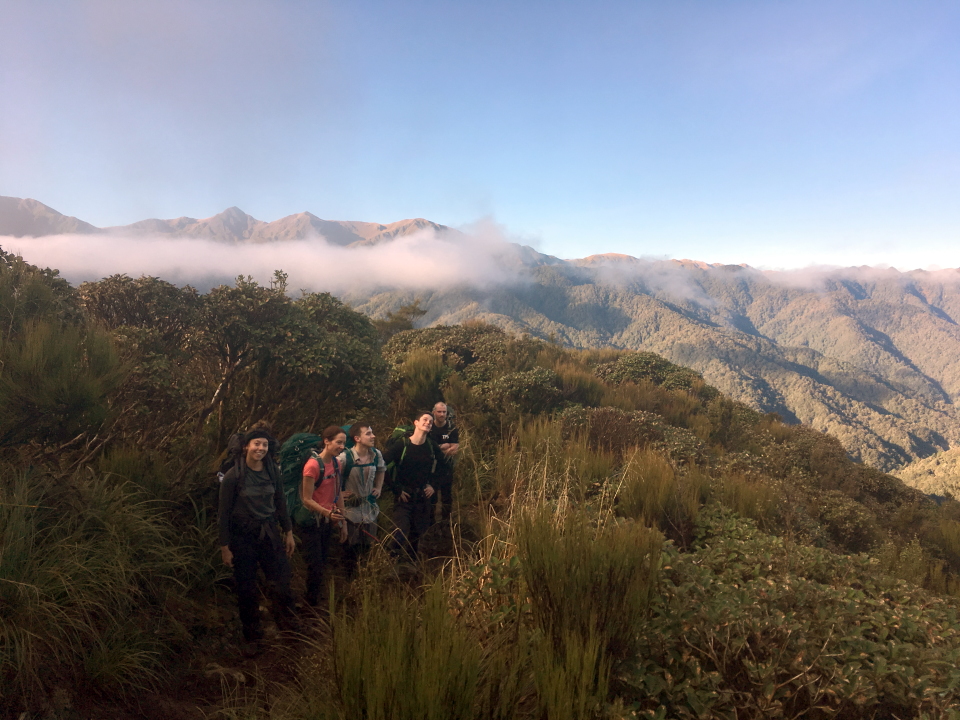 On Saturday we set off in the van from the railway station just after 6am. We arrived at the Poads Road end carpark south east of Levin at about 8am and were greeted by a local, very friendly chicken, and made to feel welcome. Most of us had the pleasure of sampling the especially ripe long drop at the carpark before heading off. We followed the path across farmland for about 15 minutes before disappearing into the forest. The morning was cold and overcast and the grass wet from dew so our boots were wet and non-waterproof booted socks were wet.

Shortly after entering the bush we took the right hand turn off onto the Te Araroa trail upwards and towards Waiopehu Track and hut. We laboured relatively slowly up the gradual incline taking about 4.5 hours to reach Waiopehu Hut where we stopped for lunch.  Conditions were cloudy and slightly damp so we had not enjoyed views after the first hour or so. To this point, the track had been in quite good condition – not much mud. All of us except Byron chose the shelter of the hut, which apart from blocking the wind was only marginally less cold than outside. In true hard man fashion Byron eschewed both a seat and a hot drink and munched his mountain-man lunch standing outside in the leeward entranceway.

After a leisurely stop we continued our journey. Together we all made our way to Twin Peak and its memorial beacon at 1097 metres taking approximately 30 minutes to do so. As was prearranged, Bart and Rosanne returned to spend the night at Waiopehu Hut. Michael decided to also join them. Maarten and his group would be joining them later for a cosy night in the fire-less hut.

Some had predicted that at our previous speed and after an indulgently long stop, we would not reach Te Matawai Hut until well after dark. But the six of us decided to make up for lost time by quickly (but carefully) descending the very muddy and steep Dora Ridge Track. After a further 15-30 minutes we passed Richard’s Knob and the turnoff to Gable End Ridge, where we had arranged to meet the other three members at 10am the next morning. Because of our steady pace we managed to reach Te Matawai Hut at 5pm-ish with 20-30 minutes before darkness fell. Luckily for us, a pair of local Levin trampers had already arrived, found dry-enough wood and had the main room toasty. Not only did these blokes make a mean fire, they also had a few stories of foreign and national hiking adventures to tell. One had completed the Te Araroa Trail and both had walked the 260km John Muir Trail in the Sierra Nevada mountains of California.

After a hearty and delicious dinner of vegetarian shepherd’s pie and some equally hearty conversation, we all retired to bed at the late hour of 830pm. For most, a deliciously long sleep followed and we overslept slightly. Tash woke us at 730am. After breakfast, a quick clean up and the collection of more firewood for the next batch of trampers, we headed off about 830. The day was very crisp but beautifully clear so we could actually see our full surroundings – mountains and blue, blue sky.

We thought we would be late to meet our other team members at the Richard’s Knob junction but we arrived just before our prearranged cut off time of 1015 at Richards Knob impressing ourselves and the other three… After a quick team catch up we headed off along Gable End Ridge back towards the carpark. Apparently the other three had spent a pleasant and not too cold night with Maarten’s group at Waiopehu Hut. The lovely weather meant that our moods were elevated and we almost skipped our way over the many and varied pools of mud and quagmires along the ridge.

After Mayo Ridge as we descended the track got drier and became easier to walk on. We made steady progress and reached the Ohau River and bridge about 2 ½ hours after leaving the Richard’s knob junction. The remaining walk alongside (but not within view of) the river was fairly easy going and we reached the end of the trees and out onto farmland about 30 minutes later. The 15 minute walk across paddocks took us past some large but doe-eyed young cows making one or two of our party nervous. Sadly, our chicken friend was not waiting for us at the carpark so after a brief change of clothes we headed back to Wellington via a coffee and snack break at Otaki.