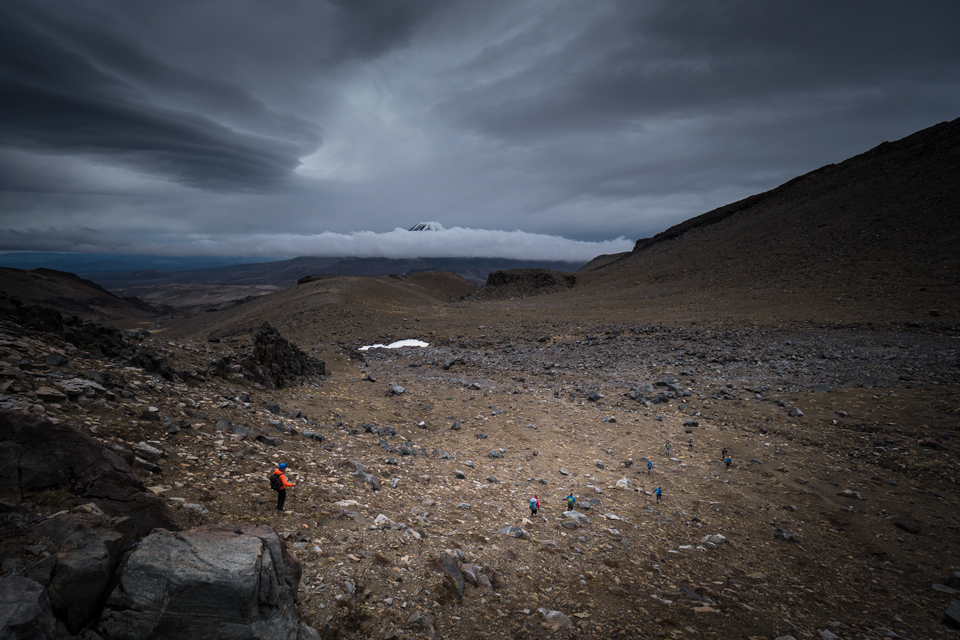 As a brand-new member of WTMC, I was informed by the trip leader that the newest members have to write the trip reports. I think it’s a freshly made-up rule, but here it is anyway. The aim of the trip was to climb Girdlestone on Ruapehu.  We never actually saw Girdlestone, nor did we even approach the right side of the mountain, so this report is about the not-Girdlestone activities that took place on the weekend of 18-19 November.

With a forecast of fine with south-easterly gales all weekend at Ruapehu, 16 of us set off for the lodge on Friday night. I couldn’t imagine how 16 people were going to climb a mountain together, and was expecting some chaos.

Because of the forecast gales, we decided to try for Paretetaitonga on Saturday and save Girdlestone for the hopefully better weather on Sunday.  Setting off at 7.30 am, up through the ski field we went. Some under-chairlift treasure hunting took place, but it is becoming less lucrative—my haul this time was 5 Australian cents. Eventually we found some snow, and crampons went on at the Knoll Ridge cafe. There was a hilarious moment watching each person in line happily walking along the sheltered side of the cafe, then getting blasted into the hand rail coming around the corner. It looked exaggerated for comic effect, but the wind really was that strong.

We staggered along in the wind for a while, until the decision was made to turn back. No summit today! What made it more frustrating was how perfect the weather was apart from the wind—blue skies, white snow, it looked stunning. A few bum slides and a bit of walking later, we made it back to the lodge.

After lunch at the lodge, and some sunbathing on the remarkably sheltered deck, Tony came up with the idea of climbing the lowest named peak in Tongariro National Park, so off we went for a nice wander up Pukeonake, with a lofty elevation of 1,225 m. A summit after all! The overgrown track indicates that it usually gets skipped on the rush to the Tongariro Crossing, but the top offered good views of all the volcanoes.

The rest of the afternoon was filled in with a wander out to Meads Wall, where Nick and Gareth had a climb, and watching the sunset from the lodge.

The forecast now was showing even stronger winds for Sunday, so Girdlestone was scrapped. After much discussion on possible alternatives, a plan was made to go up and over Pinnacle Ridge, then carry on down the other side, ending up at Tama Lakes.

We had a good Sunday morning sleep in, with a departure time of 9 am. Up through the ski field again, to the base of the Pinnacles. Looking up from the bottom the Pinnacles look rather cliffy, but scree slopes lead to the top of the ridge. We got another good blasting from the wind at the top of the ridge, then found more scree slopes leading down through the cliffs on the other side.  With a bit of navigation practice we found our way towards Saddle Cone, and then set off on the long flat march towards Lower Tama Lake. Time was running short though, so instead of carrying on to the lake we turned off early to catch the main track back to Whakapapa Village. A few showers at the end encouraged a quick walk back along the track.

This ended up being a lovely walk through a new part of the park for me, and had a great mix of scree scrambling, moss springing, and volcanic views.

I’m happy to say my expected chaos from having such a big group never eventuated.  While the list of peaks to climb remains long, and Girdlestone awaits, it was an enjoyable weekend on and around Ruapehu, and I’m looking forward to becoming a regular inhabitant of the lodge.