When, in less than the blink of a cosmic eyeball from now, I am sitting in my wheelchair in my geriatric old-age, breathless, bald, wrinkled, pot-bellied,  threadbare rug draped over my bony, aching knees, dribbling down my plastic bib and muttering dark imprecations to myself about the Youth of Today, my young nieces and nephews will come and gather before me, look up at me imploringly, and ask me, “Great Uncle Harry, what did you do with your life?”

I will slowly turn my head in their direction, squint at them through my murky, inch-thick spectacles, and ponder the question with what little remains of my muddled mind. And after many long minutes of confused thought I will have to confess, “I spent it grovelling around in the mud and the rain, cold and wet and miserable, carrying heavy loads on my back, sleeping on hard, rocky ground, eating slops out of a dirty plastic bowl, and getting scratched and bitten and blistered and bruised.”

“But Great Uncle Harry”, my horrified nieces and nephews will ask me with one voice, bewildered and confused, “why did you do that?” And I will find it very hard to answer.

My clouded eyes will gaze out to the nearby 3-D television set, where the Rolling Stones will be preparing  for their latest world tour.  Mick will be rolled on-stage in his wheelchair. Charlie will be lowered down behind his drum set on a steel cable from the ceiling. Ron will hobble out with his Zimmerframe. And Keef will be lying Dracula-like in his coffin offstage in the wings until the team of dedicated scientists responsible for preserving the corpse of Lenin open up the lid and inject him full of some mysterious chemical concoction, whereupon he will suddenly sit bolt upright, lick his lips, mutter “hmmm, good smack!”, grab his guitar, leap out onto the stage, and start up the opening riffs of Time Is On My Side.

I will hum along distractedly for a minute or two, and then I will suddenly remember something.  I will lean over and rummage through the piles of old newspapers and vinegar-stained fish and chips wrappers in the corner, move aside the ancient smelly polypros and unholy holey socks, cast aside the mounds of mouldy, munted boots,  shovel aside the vast piles of unread books and unplayed CDs, riffle through the stacks of library recall notices demanding vast overdue fines for books that I forgot to return and never even got around to reading in the first place,  and pull out an ancient copy of Tony Gazley’s tramping calendar for 2017.

“I used to have a regular gig with this guy”, I will mutter under my breath. “Every year he would give me a free copy of his calendar and I would write a review of it for him. Then I’d take the calendar down to the Used Calendar Market and flog it off, and I’d use the proceedings to buy a bag of hedge clippings and mouldy potato peelings and I’d be able to eat again.”

“Look at this”, I will say as I flip over the brittle, yellowing, time-worn pages. And there before me will appear one stunning photo of the New Zealand mountains after another.

“This may help explain the inexplicable”, I will mumble, as much to myself as to all those disbelieving young upturned faces, as I flip to the first page. 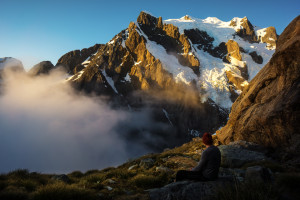 “Turner’s Bivvy”, I will mutter under my breath.  “In the Darran mountains in Fiordland. Stunning photo. Stunning spot. Unfortunately I never went there. Or to the Darrans.”

“Ngauruhoe”, I will sigh, turning the page. “Viewed from Ruapehu. Brilliant shot. It won an FMC prize, if I remember correctly. Though I probably don’t – I can’t remember anything these days. Just the kind of photo to hang up on your living room wall. See that long, low ridgeline snaking off towards the Tama Lakes, beautifully set off with crests of snow? Many decades ago I used to belong to a tramping club and on one early trip we climbed Te Heuheu then descended down off the mountain and followed that ridgeline all the way out to Lower Tama Lake and camped there.” 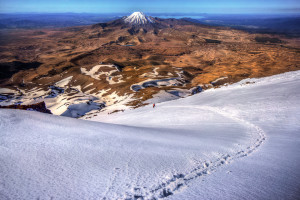 “I think Anita and BJ might have been on that trip”, I will reminisce. ”Though of course, I can’t really remember.”

I will flip over another page. “Arthurs Pass. I went there lots of times. Back in the 90’s – that’s right, that’s the 1990’s, there were actually people alive back then  – a group of us from the club would go down there for a week every winter. We’d stay in a lodge in the village and go off for day tramps, skiing, and mountain-bike rides. A guy called Lyndsay used to organize it and Anita and Rex and Paul and some others used to come along. They were great trips. The Youth of Today don’t seem to do that anymore.”

Another flip of the pages. “Poverty Basin – an amazing night shot. Look at that tent perfectly illuminated in the middle of the basin surrounded by those looming basin walls. Those massed dots of light in the sky are called stars – you never see anything like that these days with all the smog. I visited Poverty Basin once, many years ago. Back in the mid-80’s, I think. On a trip led a guy called by Paul Hughes. Another guy called Andrew Chisholm was on it too, I think, if my memory serves me well. Though it probably doesn’t.”

At this point I will lose my concentration and nod along for a while to the Rolling Stones singing Wild Horses Couldn’t Drag Me Away. Then I will suddenly start up, remember what I was talking about, and turn to another page of the calendar.

“The Mathias. I did a trip up there once, up though Canyon Creek, over Mathias Pass and Frew Saddle and out down to the West Coast. Great country – there were huts in there that only got visited about once every two or three years. Of course, they’re all gone now – DOC couldn’t afford to maintain them.”

Another turn of the page. “The summit area of Mt Ruapehu. Another great photo. Look at the way he has captured that light and those footprints in the snow. The only glaciers in the North Island. They’re all gone now, of course – global warming got them all. But it was a superb spot – up above the ski-fields, away from the ski-bunnies, you entered a world of your own.  Of course, that was back before DOC authorised 3000 helicopter landings a day up there.”

The Stones will begin singing “It’s all Over Now” at this point and I will cock my ear and listen to them for a while. Then I will turn back to the calendar.

“Mt Brewster. Another superb spot. High up above Haast Pass. Before the luxury hotels were built up there and the cable car was installed to take tourists to the top of the mountain.”

Another flip of the pages. “The Mt Arthur Range. Kahurangi National Park.  Great photo. One mountain range after another as far as the eye can see, all sharp and crisp and clear, with a figure sitting down in the bottom corner gazing out at the view.  And look at the colours – the contrast between the golden tussock, the blue sky, the green bush, and the grey rock-faces. I did some trips along some of those ranges many years ago and it felt like you could go on forever.”

“It would be a stunning photo to have up on your kitchen or living room wall, wouldn’t it”, I will add. “And you could have had it up on your wall back in 2017 if you had wanted to – all you had to do was buy the calendar from Tony or from Bivouac Outdoors in Mercer Street for $19.95, cash only, no cheques or EFTPOS, complete in its own shrink-wrapped clear plastic wrapper, available from August 2016 onwards.”

“I hope that didn’t sound too much like some crass, clumsy commercial break”, I will hastily add.

“Oh no, not at all, Great Uncle Harry”, my nieces and nephews will quickly assure me. “You sneaked it in very subtly and skilfully and we’re quite sure no-one would have noticed at all.” 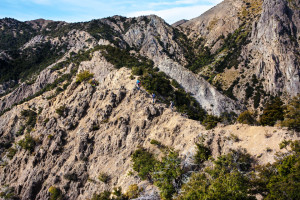 Another flip of the pages. “Ben Spur in the Seaward Kaikouras. Gnarly country – steep, eroded badlands, unlike anywhere else I’d ever been. Look at those trampers there. You can hardly see them at first  – tiny coloured dots clinging improbably like flies to a crumbly spur. I led a trip in there once trying to get to a place called Jam Hut but we didn’t make it – we got caught out by impassable cliffs. And then Tony went and did about three successful trips in a row there, just like that. “

A look of envy and annoyance will pass over my face as I recall this. “Don’t start me up about that!”, I will say bitterly. “I got no satisfaction from it and the memory will not fade away. But you can’t always get what you want and I’d be a fool to cry. And anyway,” I will add with faraway eyes, “it’s all over now and I’ve got no expectations to pass that way again.”

“That was a very lyrical speech, Great Uncle Harry”, my young nephews and nieces will tell me.

Another flip of the pages. “Snow plugging in Hukere Stream. Down in Nelson Lakes National Park. Look at how the photo wonderfully captures the atmosphere. Soft powder on the hillsides and the trees, knee-deep snow on the valley floor. Plugging through snow like that was exhausting work. I did many trips like that over the years, climbing peaks like Mt Angelus and Mt Hopeless.”

Another flip of the pages. “Mt Egmont looming over Syme Hut.” I climbed it a couple of times but it was a dangerous mountain in winter and there were many fatal accidents on it.”

Then I will have reached the back cover of the calendar. “Camping on the snow up on top of a mountain range. That photo just captures it all – the tent, the cooker, the snowshoes, the sense of adventure, the wide open spaces. Of course, that was before DOC introduced the rule making it illegal to camp within 500 kilometres of any road, hut, or track; any river, stream, or tributary thereof; any ridge or mountaintop; any plant or tree; any object containing atoms; or in any other spot specified in the official List of Proscribed Camping Locations, which could of course be consulted at any DOC  office upon payment of an administration fee of $675.99.”

“Sounds fair enough”, will say my young nieces and nephews.

I will slowly put down the calendar, having become tired from the hard work of flipping the pages, and will sense a nap coming on.

“Thanks for showing us that, Great Uncle Harry”, my nieces and nephews will say. It sure is a great calendar and those sure are really beautiful photos. And it’s amazing to think that back in 2017 you could have had it up on your kitchen or living room wall simply by buying a copy from Tony or from Bivouac Outdoors in Mercer street for a mere $19.95, cash only, no cheques or EFTPOS, available from August 2016 onwards.”

“That’s right”, I will say. “And it even had a nice spiral binding and came in its own clear plastic cover.”

On the 3D TV the Rolling Stones will have finished the concert and will be slowly hobbling off the stage. Keef will return to his coffin and the scientists will inject him with another mysterious chemical concoction before fastening down the coffin lid. The lights will go out on stage.

But by this stage I will have fallen asleep and I will not be able to answer.

PS You can view all the photos in the calendar online by visiting www.tararuaphotos.com