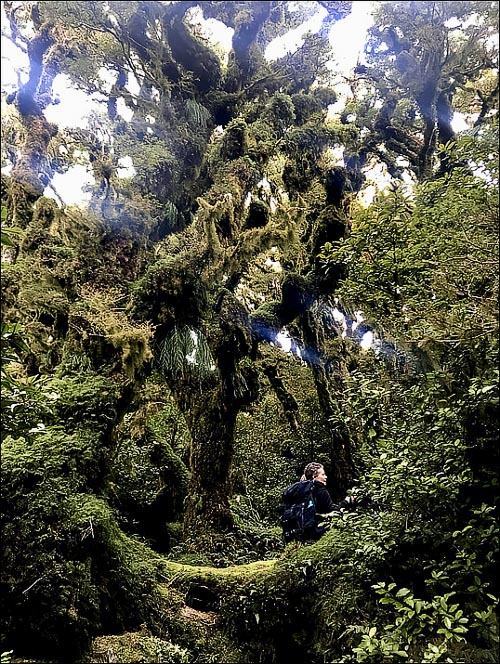 I had never stayed in Paua Hut (the club hut in the Orongorongo Valley) and also had not been up Mt Matthews for over four years. When I saw that this tramp required a leader I volunteered.

After leaving Wellington Station as per normal on the Friday evening we drove to the Catchpool carpark at the Remutaka Forest Park. We had a dinner/snack at the carpark and met with Matt’s group – they were also staying at Paua Hut with us that night.

Near the start of the Orongorongo Track I showed my fellow trampers the memorial plaque to my maternal grandparents. My grandparents lived in Wainuiomata for about 50 years and although there were not trampers they had spent a lot of time in the Remutaka Forest Park. Some money from their estate contributed towards the information displays about native birds.

We had a pleasant walk over to the Orongorongo Valley in warm conditions. As we travelled we all chatted away with each other. There were nine of us in total so there was plenty of opportunity to talk and catch up with other people from the club. While everyone was chatting away I was thinking that this is one of the things I love about tramping and our club – just the way that everyone gets on so well with everyone else.

We had a practice of the mutual support river crossing technique once we reached the Orongorongo river and then soon after we were ensconced in Paua Hut where we had a comfortable night’s sleep.

In the morning we bade farewell to Matt’s group. They were off up Paua Ridge and then over to Corner Creek Campsite (read their trip report).

We headed upstream and to the start of our route to South Saddle from Goat Stream. There is a slight scramble to find the route from Goat Stream but we found a hut and the route easily. This route up to the saddle is easy to follow with regular markers and orange tape to show the way. I’d been this way once before with Maarten earlier in the year and enjoyed it. It’s easier and faster to go up to South Saddle via this route than the Matthews Stream/Mt Matthews track. This route has a gentler gradient and also avoids a couple of kilometres of travel up river and up Matthews Stream.

By late morning we were having a (late) morning tea at South Saddle. The wind was a bit chilly but we had clear weather so could enjoy views to Wellington and out to the Southern Wairarapa coast. As we were enjoying the views we wondered how Matt’s group were doing.

During our break we were joined by Dave. He was involved with the weekend pest trapping programme and was checking traps from South Saddle towards Tapokopoko. I know some WTMC members (Brian and Jan) were also involved with the trapping during the weekend and I mentioned to Dave that we would hopefully see them later in the afternoon at the Landcare research base. Dave is very dedicated to the New Zealand outdoors and wildlife. Not only is he a trapping volunteer he also works for DOC.

From South Saddle there is quite a steep climb to Mt Matthews. As we ascended we passed through some lovely goblin forest. I’d forgotten about this part of the track and we all enjoyed this stretch of bush.

We were lucky with the weather and had clear views from the top of Mt Matthews. We had a late lunch and enjoyed the wide views from the highest point in the Remutaka Forest Park.

After lunch we started our descent back to the Orongorongo River. We stayed on the Mt Matthews track as this descended steeply back to the river. We had a brief afternoon tea next to Matthews Stream and then started walking downstream to Paua Hut. Just opposite the Whakanui track we flagged down a passing 4 wheel drive. They were going to the Landcare base as part of the trapping weekend. We had an exciting but bumpy ride downstream but we really appreciated this ride as it saved us about 5 km of walking.

At the Landcare base we chatted with Brian, Jan and Megan who along with lots of other people had been busy with trapping activities. From the Landcare base it’s a short walk to Paua Hut. When we got to the hut we saw Matt’s group sitting around relaxing. They had got stuck in dense scrub on the tops and had to turn back.

As we were based at Paua Hut for the weekend we had taken lots of food. So soon after arriving we started eating! We had snacks/starters, a main course of a Thai curry and a dessert. Paua Hut is well set-up with a gas cooker, pots and pans, crockery and cutlery. We had a fun evening in the hut of eating and chatting and general relaxing.

The next morning we departed from Paua Hut and tramped back to the carpark via the steep Butchers track and then along Cattle Ridge track.

On the way back to Wellington we did a quick tour of Wainuiomata (where I grew up) and also stopped off at Zainy Zeus in Moera for more food. We had a great weekend of good weather, varied terrain, views, 4 wheel driving, food and an excellent company. It was good to finally stay at Paua Hut and I recommend the hut as a perfect base for Orongorongo explorations.